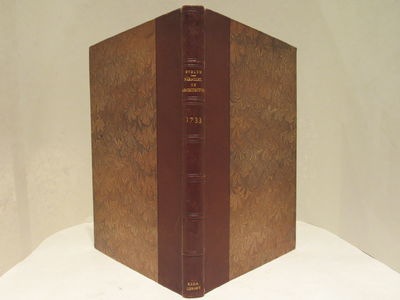 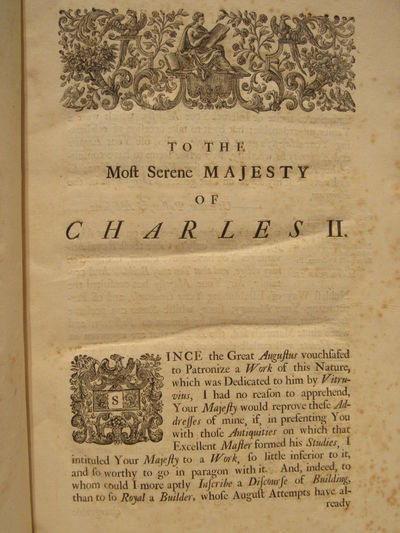 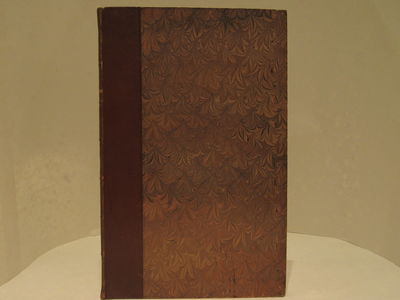 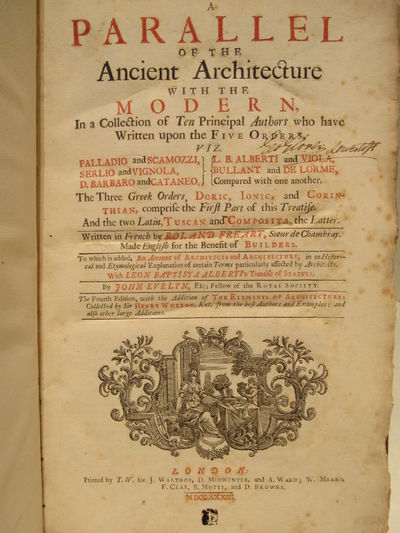 A Parallel of the Ancient Architecture with the Modern, in a Collection of Ten Principal Authors who have Written upon the Five Orders...Compared with one another.

London: J. Walthoe, D. Midwinter, A. Ward; W Mears, F. Clay, B Motte, and D. Browne. Very Good. 1733. Hardcover. [John Evelyn, translator and editor]. Roland Fréart, sieur de Chambray. A Parallel of the Ancient Architecture with the Modern, in a Collection of Ten Principal Authors who have Written upon the Five Orders...Compared with one another. The Three Greek Orders, Doric, Ionic, and Corinthian, comprise the First Part of this Treatise. And the two Latin, Tuscan and Composita, the Latter...To which is added, An Account of Architects and Architecture, in an Historical and Etymological Explanation of certain Terms particularly affected by Architects. With Leon Baptista Alberti's Treatise of Statues...The Fourth Edition, with the Addition of The Elements of Architecture: Collected by Sir Henry Wotton, Knt. from the best Authors and Examples...London: Printed by T. W. for J. Walthoe, D. Midwinter, and A. Ward; W. Mears, F. Clay, B. Motte, and D. Browne, 1733. Fourth edition (first published in 1664) of John Evelyn's translation of Roland Fréart's Parallèle de l'Architecture antique et de la moderne, which was first published in Paris in 1650. Two parts in one large folio (14.5 x 9.25 inches; 370 x 235 mm.). [24], xxiv, xxix-xxxviii, 115, [1, blank]; [6], 53, [1, blank], [2], 61-74 pages. In the first part, pages 74, 75, 79 are misnumbered 72, 69, 69; in the second part, page 73 is misnumbered 71. Signatures: a-e2 a-i2 k1 B-Z2 Aa-Gg2 A-P2 R-U2. Title-page printed in red and black with wood-engraved vignette. Fifty engravings in the text (forty full-page, two half-page on pages 67 and 69 in the second part, and eight head- and tail-piece vignettes). Small woodcut diagram in the text on page 47. Decorative wood-engraved head- and tail-pieces and initials.Bound by H. T. Wood in 1935 (stamp-signed on front pastedown) in quarter brown hard-grain morocco, ruled in blind, over marbled paper-covered boards. Spine ruled in blind and ruled and lettered in gilt with eight very slightly raised bands. Foot of spine stamped in gilt: R. I. B. A. / Library. Deckled edges. Fore edge corners bumped. Intermittent moisture marks; some light to moderate foxing. Upper corner of N2 (pages 45/46) in the first part torn away; one-inch tear in the outer margin of G2 (pages 21/22) in the second part; a few additional marginal paper flaws. A very good copy.More Information:Armorial bookplate of The Royal Institute of British Architects, "Anno Salutis MDCCCCXXXIV," and pencil shelfmark (E.W. 72 : 013 (44)) on front pastedown. Early ink signature on title-page: "Geo Glover's Lowestoft" (architect George Glover (1811-1890) of Lowestoft and Norwich). Small illegible ink stamp at foot of the title-page and a few other pages.ESTC T117369. Harris 236. Keynes, Evelyn, 78. RIBA, Early Printed Books, 1137. See Fowler 130 and Millard, British, 19 (describing the 1707 second edition). Millard, French, 76 (describing the 1650 first French edition)."John Evelyn's most successful book, Sylva, was written in 1663, at the request of the Royal Society, of which he had been a founding member, and was published in 1664. In the same year he issued the first edition of his translation of Roland Fréart's Parallèle de l'architecture antique avec la moderne, of 1650-'I had,' Evelyn wrote in his dedication, '(by the Commands of the Royal Society) endeavour'd the improvement of Timber, and the planting of Trees, I have advanced to that of Building as its proper and natural consequence'...In the first part of the Parallel Fréart deals with the three Greek orders as illustrated by a range of theorists and commentators, Palladio and Scamozzi, Serlio and Vignola, Barbaro and Cataneo, Alberti and Viola, Bullant and De L'Orme...The second part of the Parallel concerns the Tuscan and 'Composita,' dealt with in much the same way as before, but at less length...At the end Evelyn made his own contribution; he expanded Fréart's one-page explanation of terms to a twenty-eight page 'Account of Architects and Architecture, together with An Historical, and Etymological Explanation of certain Tearms particularly affected by Architects.' He took his cue from Vitruvius, dealing, in an essay rather than in an alphabetical list, with the qualities requisite for a good architect, a good patron, and a good workman, and then with a detailed analysis of the various parts of the orders. There had been nothing like this before in English, and though Evelyn claimed to be addressing his work primarily to craftsmen, they would not have comprehended much of his meticulous analysis. Appended to the Parallel was the first translation into English of Alberti's Della Statua-'There is no man pretending to this Art, or indeed to any other whatsoever, who does not greedily embrace all that bears the name of Leon Baptista Alberti'" (Millard, British, 19).; 8vo 8" - 9" tall; xxxviii, 74 pages; All shipments through USPS insured Priority Mail. . First Edition.

Title: A Parallel of the Ancient Architecture with the Modern, in a Collection of Ten Principal Authors who have Written upon the Five Orders...Compared with one another.

A Parallel of the Ancient Architecture with the Modern, in a Collection of Ten Principal Authors who have Written upon the Five Orders...Compared with one another.