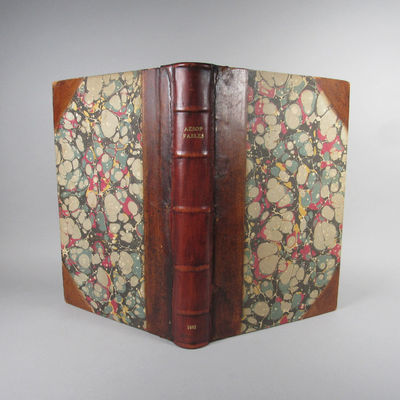 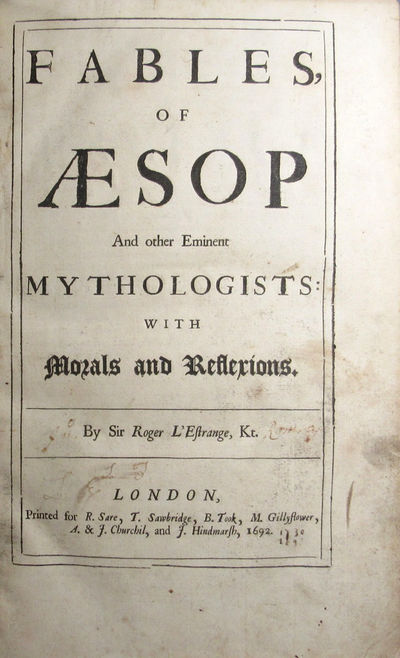 Fables of Aesop and other Eminent Mythologists: With Morals and Reflexions.

London: J. Hindmarsh,. Very Good. 1692. First Edition thus. Folio. Engraved frontispiece portrait of L'Estrange by Roger White after Geoffrey Kneller and full page engraving of Aesop and animals. Nineteenth century half calf over marbled boards, rebacked, spine bands, title gilt, new endpapers, soiling and pen annotations to title page, some foxing, some leaves toned, minor smudges and stains, occasional pen annotations in the margins, one small hole and track in the lower margins (pages 129 to the end) from biopredation, not affecting text; edge of portrait repaired (no loss), overall a very good copy. Roger L'Estrange (1616-1704), Tory journalist and pamphleteer, was notorious in his day for his many works against the dissenters and Whigs. He received license of the press in 1692 to seize all seditious books and libels, apprehend the authors, and bring those responsible to "justice"; he used such license liberally, and in effect, reigned in terror over his adversaries until the time of William and Mary. At the same time, he was a rather impecunious man, and so issued a number of translations and editions of classic works. He added later a second volume to this popular work which is not present here. "The Aesop, on the other hand, was actually an assemblage of fables and facetiae from a variety of sources, ancient and modern, the second volume being wholly un-Aesopian. The trenchant reflections added to the individual fables possess a strong political animus and were to draw severe criticism from the later Whig fabulist Samuel Croxall; but all L'Estrange's translations have some degree of political colouring." . A-B2, a-b4, c6, d4, 2B-2Q4, 2R-2T2 2U-3Q4. [10], 28, [8], 306, 319-480 pages. Oxford DNB. Wing A706. ESTC r61122.; All shipments through USPS insured Priority Mail. . First Edition.

Title: Fables of Aesop and other Eminent Mythologists: With Morals and Reflexions.

Fables of Aesop and other Eminent Mythologists: With Morals and Reflexions.